**Updates: We received this link from a reader with ELEVEN awesome recipes! Check it out by clicking the image below, as there may be an even better recipe for your dog’s specific dietary needs. All the recipes look easy and fun. 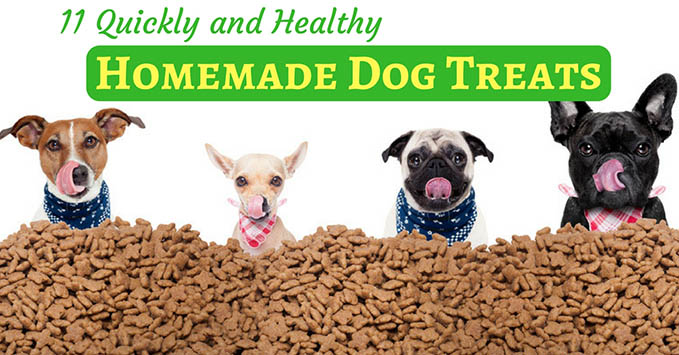 The winner of the autographed copies of The Sound of Sleigh Bells, The Christmas Singing, The Dawn of Christmas, Amish Christmas at North Star, and this year’s release, The Angel of Forest Hill is Linda of Macon, Missouri. Congratulations, Linda!

My house is a house of dog lovers. Maybe more of us would be cat lovers if my husband wasn’t allergic. 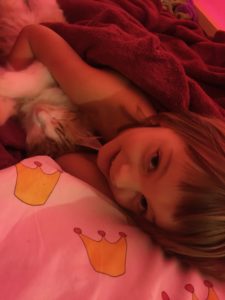 (My granddaughter Lucy LOVES cats and dogs. Here she is with the world’s most tolerant tabby, Boots.)

But dogs are wonderful pets. As I was writing this blog, my 18-month-old lab mix pup, Tassie, bounced her paws on me. She then tried to pull the blanket off my legs. That’s her way of asking…uh, demanding, I play. 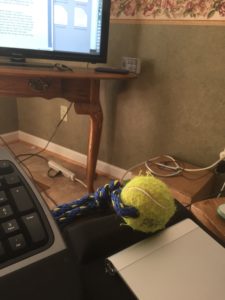 So I grabbed a tennis ball, wrapped the blanket around my shoulders, and moved to the back porch. I need to get up and move around, and she makes me do so regularly throughout my workday. My spirits lift each time, just watching her excitement, and I often end up laughing out loud at some antic of hers. This time, as she dove for the ball, leaves caused her to slide, the ball buried deep under the pile she inadvertently made. She glanced at me as if to ask, “Where’d it go, Mom?” Then she focused and found it, very pleased with herself as she climbed the steps to bring it back to me, something she then did numerous times before looking a little less energetic. 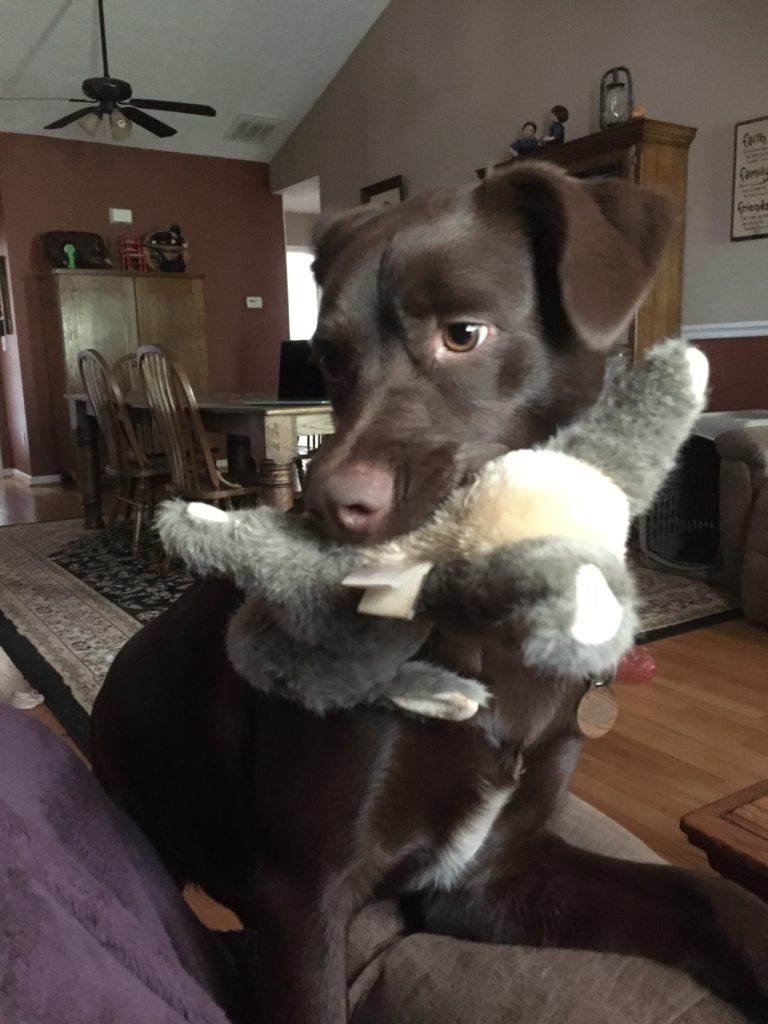 When I adopted Tassie from a local animal shelter in late Summer of 2015, it arguably wasn’t the best time for a puppy. I was under writing deadlines (no surprise, right? :-)), my husband was working a lot of hours, and we were having work done to our house—loud, messy work. What business did I have getting a puppy? But she quickly ended up being a beloved member of our family, keeping me company throughout the day and delighting my grandchildren with her silliness when they visited. Even in her youngest weeks, with the help of a gentle leader collar, she was very tame and tender with the grandchildren.

Tassie isn’t the first dog I’ve loved. When I was a child, my dad got a series of dogs named “Nicky.” The first Nicky was a purebred Sheltie (called Sheltie Collie at the time. Soon afterward was renamed a Shetland Sheepdog). She was a gift from my dad’s boss. Dad tried everything under the sun to train Nicky into a functional family animal, but after several months, Dad was at his wits’ end. Eventually he adopted out the purebred to a more patient family who had land. Dad got a new dog, a Collie mix…who he also named Nicky. When I was a young child, I didn’t think too much about this, but he later told me that the name choice was so that when his boss would ask, “How is Nicky?” my dad could answer, “Nicky is great! My kids love her!”

Hm. Let’s not think about that too long and move forward.

I had other well-loved dogs growing up, and when I married, my husband and I were rarely without a dog. One of the first was a Weimaraner named Mandel. We later got a grown dog named Scooter, who had the unfortunate trait of being obsessed with escaping and chasing cars. When our two oldest boys were little, we got Odie, a chow/wolfhound mix. Oh, my. She was adopted from a rescue when we lived way out in the country and she ran free on sixty plus acres of farmland. But when we needed to move to a small lot, it seemed unfair to her to then pen her up, so we gave her to my brother-in-law who had many acres of land and a river nearby. She lived the longest of any dog we’ve ever owned, still hunting rodents until she was over sixteen years old (VERY old for a large breed dog).

When my third and youngest child was born, almost a decade after his brother closest to his age, I knew my sweet middle son would need a dog as he adjusted to the new family dynamic. Call it intuition. So we adopted Annie, a chow/yellow lab mix, from the shelter, and she was his buddy from then on. While extremely sweet and loyal (and surprisingly calm), she quickly earned the reputation as “Annie the Cowardly Dog.” Storms sent her running to the couch to hide behind her family. Any unexpected noise made her shudder. One time she and I had a standoff over her using an auto-filling water dish that made a “glug” noise. She won. When my middle son moved an hour away to college, he would often come home on the weekends to walk her. She passed gently of old age, not long before he finished undergrad.

Several years before Annie passed, I knew we needed to get a second dog. Annie had been a part of my youngest son’s life since he was a baby. He needed years to bond with another dog before Annie died. Annie had been perfect for Adam, but she hadn’t been a very energetic dog. Looking for a spry puppy, we returned to the animal shelter. 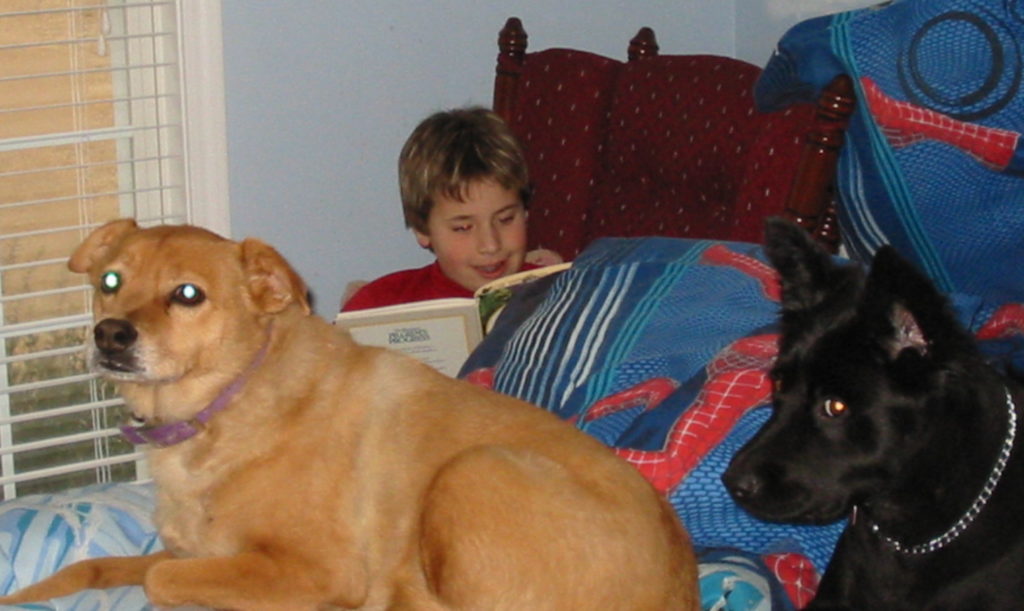 Jersey, a black and extremely fluffy Australian sheep dog/blue heeler mix, soon joined our family. We later found out she had been adopted previously and returned to the shelter twice for being “difficult.” But our family was up for the challenge. She LOVED my son, but often tried to herd the adults of the family, a behavior we had to put a quick stop to. She barked at anyone who came near the house, and would relentlessly chase anything that moved. If you threw a ball for her, she would chase it for hours, even when she was panting and gasping for breath. I was always afraid she would give herself a heart attack. In my upcoming book, Gathering the Threads, there is a scene inspired by Jersey and her ball fetching. See if you can find it when the book releases this August. 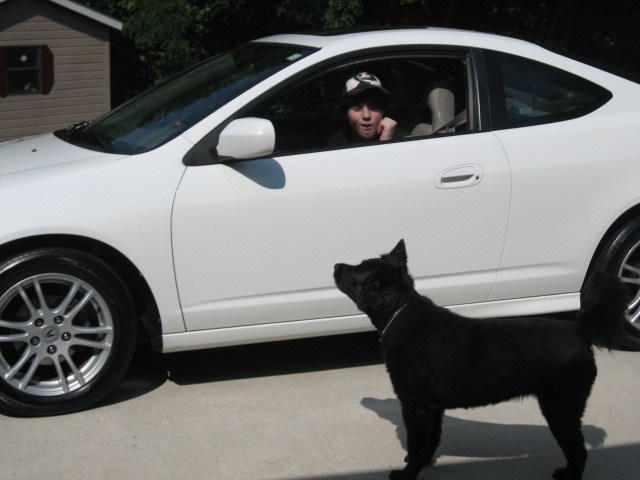 (Jersey watching her boy drive off alone for the first time at age sixteen.) 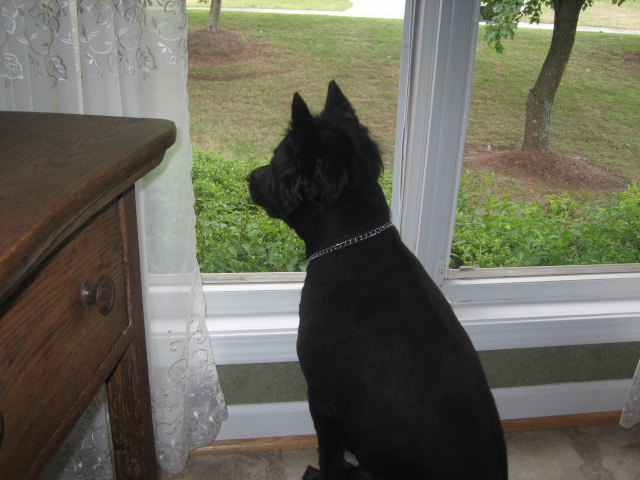 (Jersey waiting on her boy to return.)

Like many of my peers, I also have a “granddog.” Her name is Rosy, and she belongs to my middle son Adam and his family. She sometimes comes to my house when they go on trips, and I spoil her by giving her treats and letting her sleep on our bed. My son says she thinks of my house as an extension of her own, and she was very surprised to find a new puppy here last year. Luckily after a little adjustment, she and Tassie get along. 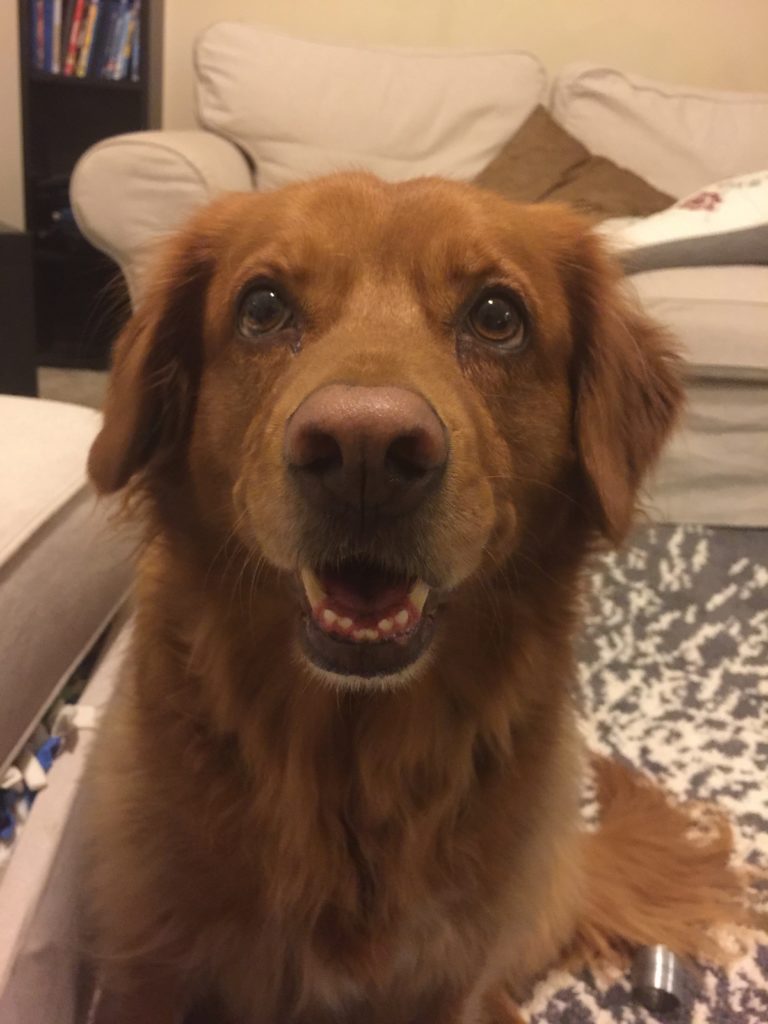 My Amish characters often love dogs too. Many Amish families own a farm dog for multiple reasons. I’ve been able to include several of my real life dogs’ traits in these fictional characters, and that’s a lot of fun for me. I have one character in my first series, Sisters of the Quilt, work with rescued Australian Shepherds and this is very therapeutic for her. In The Hope of Refuge, the characters find a litter of abandoned puppies. They make sure all go to good homes, and they adopt one, who they name Better Days. I enjoyed writing several fun scenes using puns on the name Better Days.

In the Amish Vines and Orchards series, Samuel searches the newspapers for weeks, looking for the right dogs. He finds them, two older blue heelers named Ziggy and Zara, and they are a a perfect fit to watch over the apple orchard and chase away deer.

In my latest series, Amish of Summer Grove, Quill has a female golden retriever named Lexi. He’d wanted a dog like this his whole life, and when he was an adult living on his own, he finally got one. She’s a good, well-trained dog. He’s a single man who has time to train his dog! That’s what I say.

For all dog lovers out there, below is a recipe for dog treats. Just in time to make as a Christmas treat for your favorite dogs. 🙂 Inspired by The Cookie Rookie. 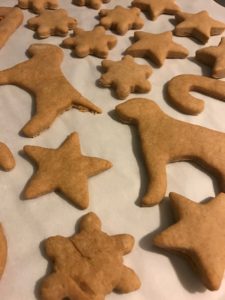 2 tbs honey (if your peanut butter is sweetened like mine, skip the honey)

Directions: Preheat your oven to 350. In a large bowl, combine all ingredients and stir by hand or with the paddle attachment on your mixer until a stiff dough forms. The dough will be very firm and sticky. On a lightly floured surface, roll the dough to 1/2 inch thickness. Cut out into shapes using the cookie cutters or a butter knife. Place on a cookie sheet covered with parchment paper and bake for 20 minutes until golden. 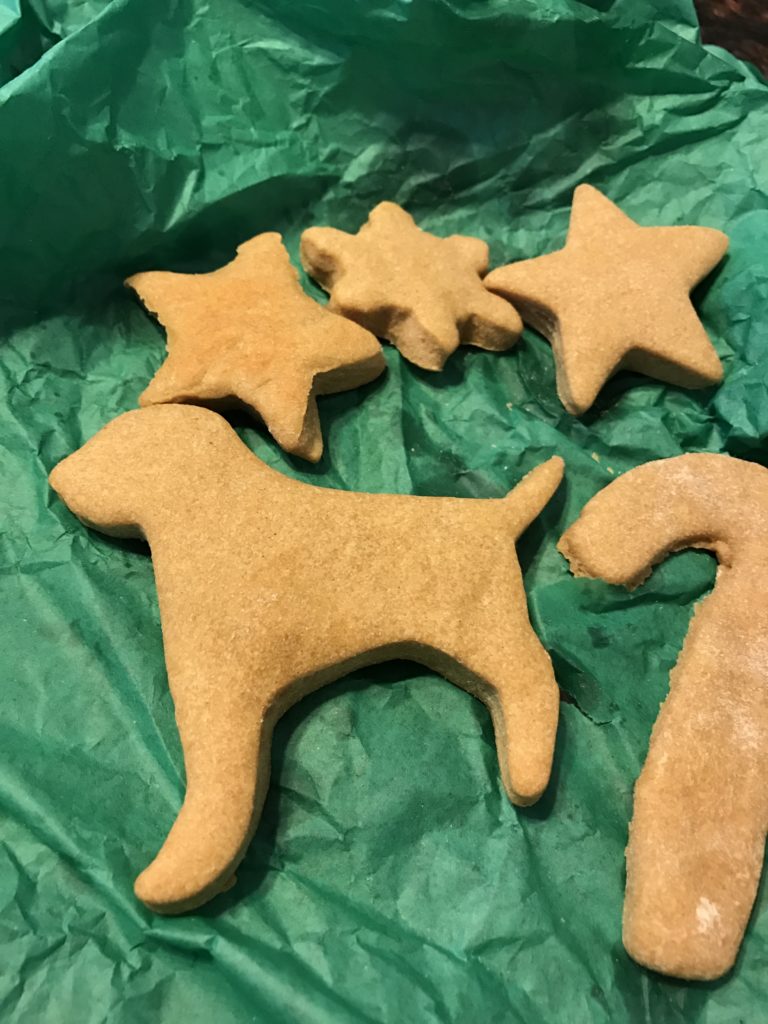 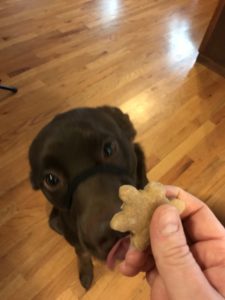 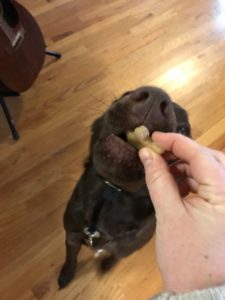 For a chance to win a copy of The Sound of Sleigh Bells, The Christmas Singing, The Dawn of Christmas, Amish Christmas at North Star, and this year’s release, The Angel of Forest Hill, just leave a comment on this blog. Due to the uncertainty of shipping, they may arrive for Christmas, or they may be part of your downtime a few days afterward. If you’re a first-time commenter, please read the “Helpful Tips” section below.

Only comments made on my website will count as entries. So if you’re reading this blog anywhere other than on my website and you’d like to enter the giveaway, please hop over to my site and leave a comment there.

The deadline for entering this giveaway is Tuesday, December 20, at noon Eastern Time. One winner will be chosen using Random.org and will be contacted directly. All of my giveaways are limited to US residents only. Please visit my giveaway rules and FAQ page for a complete explanation of the terms and conditions of this giveaway.

The third field in the comment form asks, “Got a website?” Please feel welcome to leave that field blank. (If WordPress would let me, I would remove that question!)

If you don’t see your comment appear right away, it probably went to “moderation,” which is a holding place where WordPress keeps some of the comments until I approve them. Be assured, I will approve it as soon as I can. 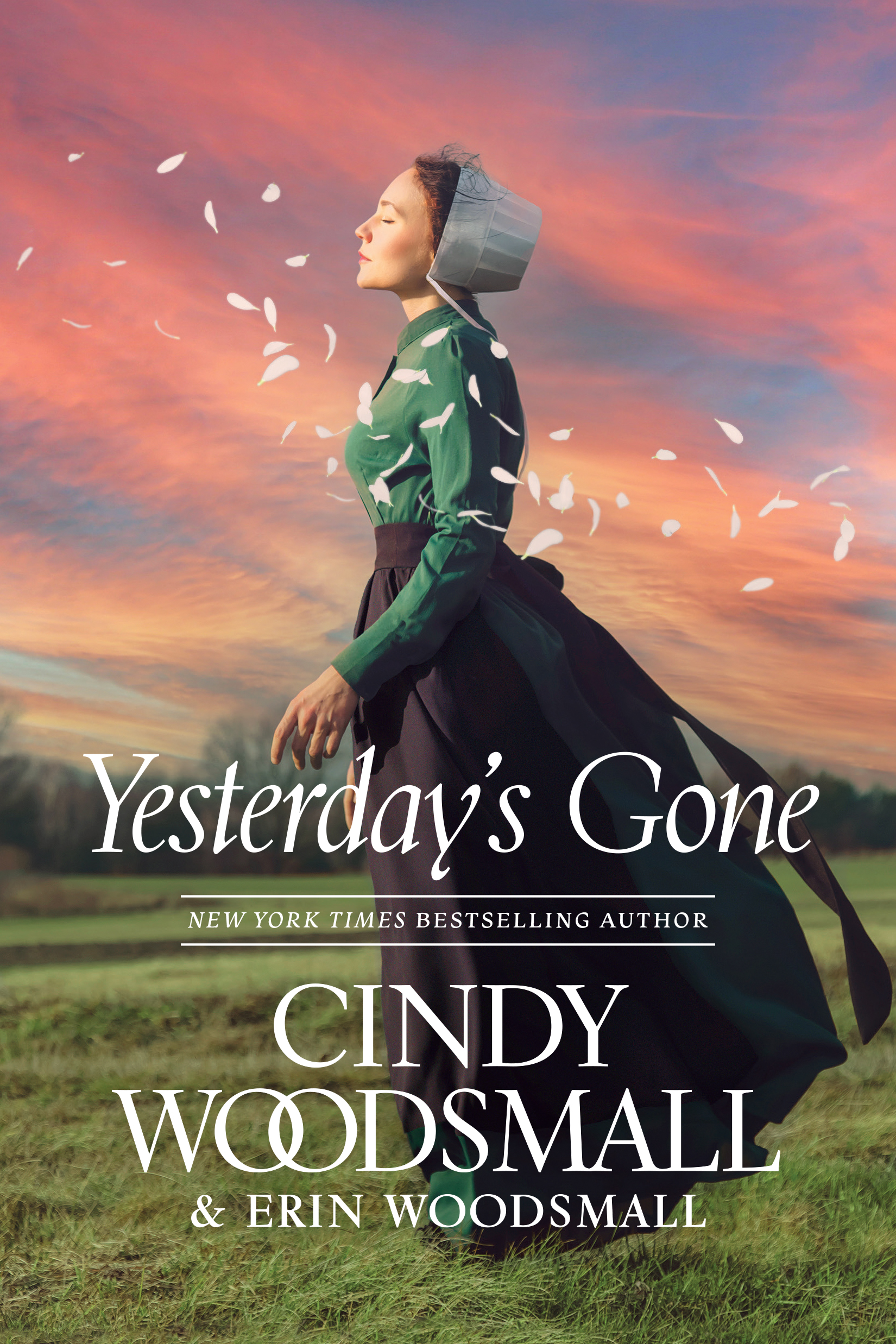